What is the significance of “Paumalū”?

If the area known as “Sunset Beach” was referred to with it’s Hawaiian name, it would be called “Paumalū.”

Paumalū would be the ahupua’a in which Nina Alena Beatty resides in today.  Some of her weekly classes are also taught in the area.  Ahupuaʻa is an old Hawaiʻi term for a large traditional socioeconomic/ geologic/ climatic subdivision of land.  The ahupuaʻa consisted most frequently of a slice of an island that went from the top of the local mountain to the shore, often following the boundary of a stream.  The Hawaiians believed that the land, the sea, the clouds and all of nature had a certain interconnectedness which is why they used all of the resources around them to reach the desired balance in life.

Paumalu means “taken secretly.” This reference went back to the days of kapu when a woman who once caught more octopus than was permitted there, had her legs bitten off by a shark.  In another legend, an ali`i (chief) of Kaua`i named Kahikilani crossed the hundred miles of open sea between his home and O`ahu just to prove his prowess in the great surf there. It has be said that Kahikilani also had an unfortunate affair with a bird maiden and ended-up petrified. His image, complete with a petrified lehua lei around his neck, stands on a barren ridge above Paumalu Bay (Kammieland).  This rock can still be seen today! 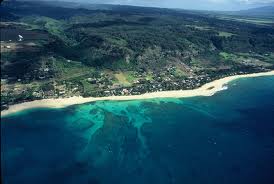 An ariel view of Paumalū.